Akira Natsume is the main protagonist of EX-ARM. 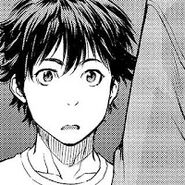 Akira in the manga

Akira in the anime

Akira was a normal shy high school boy, however while he had a phobia of technology he also had the skill to easily repair broken devices. In 2014 after stepping up and saving a girl he was unfortunately run over by a truck.

Sixteen years later the police duo Alma and Minami Uenozono are on a mission to obtain EX-ARM No. 00, however they find themselves up against a group using EX-ARM No. 08, desperate they activate EX-ARM No. 00. Mysteriously, Akira's consciousness awakens within the super-weapon body and he must now co-operates with the police with the goal of getting his lost memories and body back.

Throughout the show, Akira is shown to be unable to close his mouth. It can be inferred that this is a result of the accident in 2014, although this is unconfirmed.

Community content is available under CC-BY-SA unless otherwise noted.
Advertisement